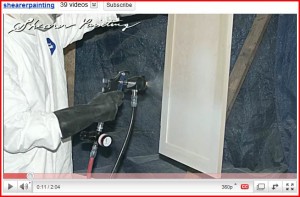 Conversion Varnish vs. Traditional Lacquer
Exposed wood surfaces require a finish to preserve color, texture and prolong the life of the material. When searching for a proper finish, many will select one of two options: varnish or lacquer.  But what exactly is the difference between these two products? What are the benefits of using one over the other?  Though the results may look similar, there are some key differences to these two materials. Selecting the proper finish is not only a matter of protection, but also brings out the way you want the final product to look and feel.
Traditional lacquers consist of a pre-catalyzed, nitro cellulose finish that has 12 to 18 percent solids per volume and is air cured. Being pre-catalyzed, there is no need for the mixing of hardeners, thus making lacquer a single component finish. Because of its low solid content, lacquers often have to be reapplied many times for proper build and solid film density. Most traditional lacquers will run, on average, about 25 dollars per gallon 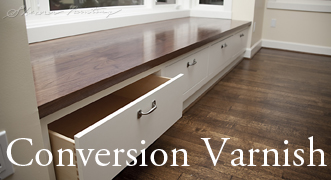 Conversion varnish is a two component, post catalyst, chemical cure finish. This particular finish requires the mixing of an independent catalyst with the varnish itself. This is a delicate process as the mixture must have the correct ratio of the two chemicals in order to harden properly. However, with its higher solid content of 40 to 60 percent by volume and a dried film density of twice that of traditional lacquer, conversion varnish takes fewer coats for a complete build and satisfactory film density. Because of its ability to cure chemically, dry time is drastically shorter than that of traditional varnish. With its rapid hardening, this varnish does take more finesse in terms of even application. Furthermore, conversion varnish is also more costly with prices ranging from 60 to 80 dollars a gallon. Nevertheless, the results speak for themselves. Conversion varnish is more durable and has a higher elasticity, which allows it to hold up better through wood joint expansion.
Though either product will provide protection for wood surfaces, it is the conversion varnish that will succeed in providing a long lasting, durable finish.

Lacquer shouldn’t be a general term for clear finishes, the only thing they have in common is that they are clear. Lacquers’ are either nitrocellulose, acrylic, or derive from lac. (but those are now called shellac). Some are pre-catalyzed some are post catalyzed, and some don’t use a catalyst ( a more traditional lacquer). A traditional conversion varnish is an alkyd product. Acid catalyzed for curing. It hard to follow along with basic terms like lacquer when you have such a variety of clear